Posted on March 1, 2013 by calvinartdepartment

According to legend, the Tikhvin Mother of God, a circa-1850 icon of the Virgin Mary and the Christ Child, was transported to Tikhvin from Constantinople. The Sign Mother of God, another icon from the same year, was believed to have stopped an army by weeping in intercession. These two Mother of God images are among the 26 icons in Windows to Heaven: Treasures from the Museum of Russian Icons, held at theCenter Art Gallery March 1–April 27.

“You don’t look at them; you look through them,” explained Calvin art history professor Henry Luttikhuizen, “and the idea is that you venerate the icon as a means of worshipping God … . Icons are to be understood as avenues or windows or openings to the divine.” 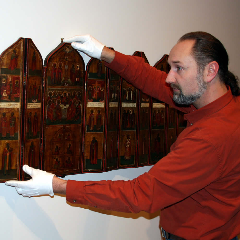 The exhibition combines icons representing holy figures—the prophet Elijah, John the Baptist, St. George (slayer of the dragon), St. Nicholas, St. Cyril, St. Methodius, St. Nil and St. Paraskeva—with icons of the baptism and resurrection of Christ, a calendar of saints and an iconostasis, an icon made up of 15 folding panels painted with biblical themes: Jesus, the apostles, the Lord’s Supper, The Passion.

The iconostasis was a portable teaching tool, said Calvin director of exhibitions Joel Zwart: “This is a way for the priest to bring the sacraments to small villages. He could actually create a sacred space within a home.”

A History of Icons

With images dating from 1590 through 2005, Windows to Heaven traces the history of iconography. “Before the advent of the printing press, people taught with images, and that’s why there are images in churches,” Zwart said. People also hung icons in homes, businesses, schools and other public spaces, he said: “You put the icon anywhere and everywhere because you want to evoke the presence of the sacred.”

Icons are not artworks in the traditional sense, said Calvin professor of art history Henry Luttikhuizen. They are instruments of devotion. “They’re meditational aids for worship for people who believe in their use.”

Nor are iconographers artists. “They consider themselves makers,” said Zwart. “There is, in a sense, a formula that icon makers follow.”

Luttikhuizen explained: “When an icon painter works, it’s considered an act of prayer. So it’s not about artistic creativity. It’s about deepening devotion, and, in most cases, it’s about repeating what’s worked in the past.”

Saints typically posed frontal, always haloed (“to differentiate them from other people”), sometimes with a hand raised in blessing. They are often identifiable by certain visual trademarks: John the Baptist, for example, is usually garbed in camel hair. There is liberal use of gold “to suggest the heavenly or celestial,” Luttikhuizen said.

Any variation from these themes adds a layer of meaning to the image. The Tikhvin Mother of God, an egg tempura on wood painting featuring the Virgin Mary on the left, is encased in ornamental metal. The metal, like the glass-beaded cover on the The Sign Mother of God, confers respect on both the icon and the person pictured. “It’s like adding extra veneration to it, making it extra special,” said Zwart.

Icons communicate the idea of God as incarnate, said Luttikhuizen. The images stress the orthodox belief that because God existed as a human being, he should be pictured in human form: “There’s a kind of comfort in being close to the divine or that you have access,” Lutthikuizen said.

Zwart acknowledged the challenges of creating images that convey a sense of the divine: “How do you create an image of Jesus with no primary source material and also bearing the burden of his holiness?” Zwart said.

Reformed believers have traditionally argued that you can’t, said Luttikhuizen, including the reformer who lent his name to the college: “Calvin’s response is that the infinite cannot be contained in the finite. So, to show God’s human form is to reduce his status or glory by negating his divinity … . It’s something that the Reformed faith has struggled with.”

He hopes that believers of many traditions will benefit from Windows to Heaven. “I think this is a great opportunity for people in West Michigan to learn more about Russian culture and orthodoxy,” Luttikhuizen said.

This entry was posted in Center Art Gallery, Exhibition, Painting. Bookmark the permalink.
%d bloggers like this: